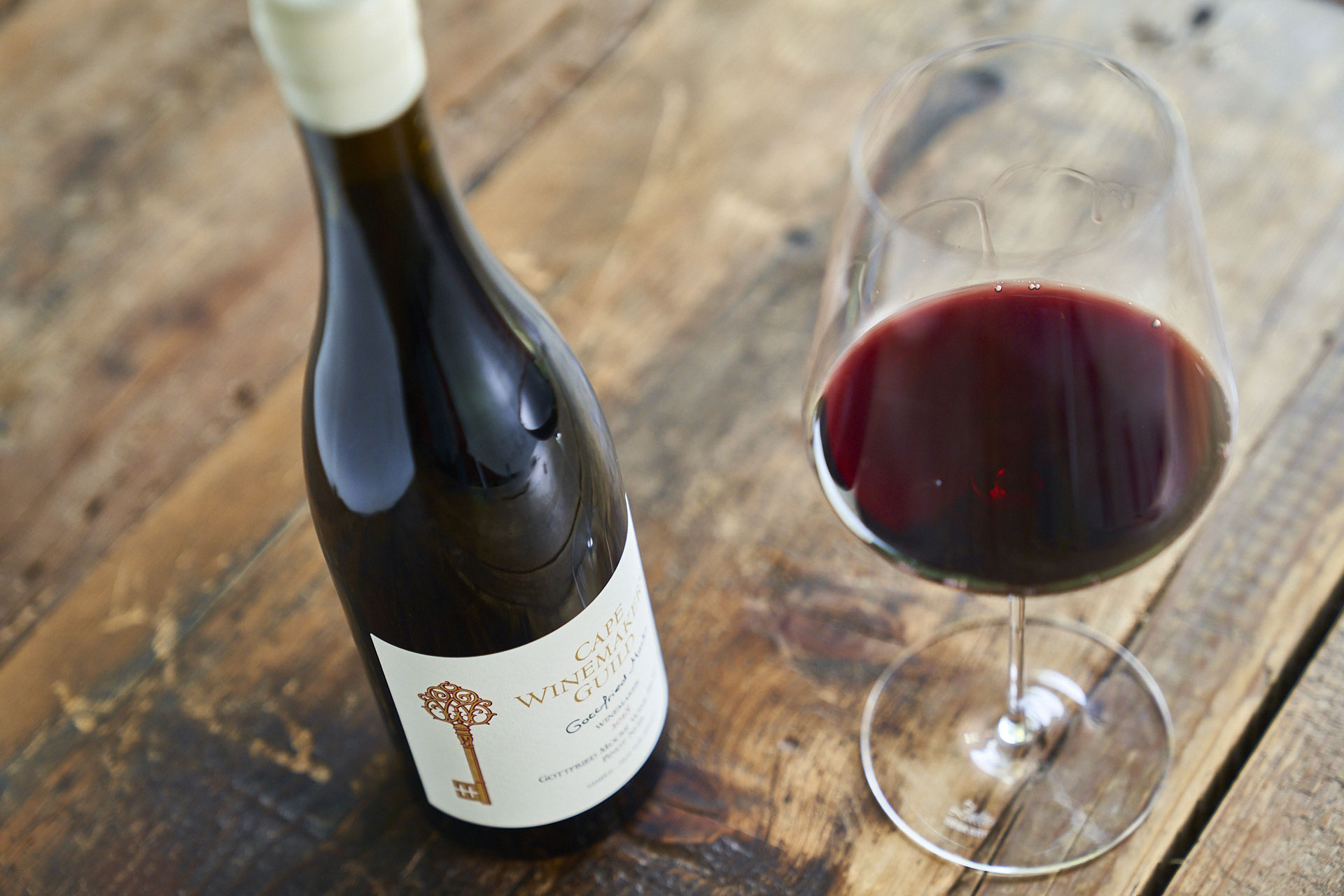 The annual Nedbank Cape Winemakers Guild Auction showcases rare and unique wines produced in small quantities exclusively for the auction by the members of the Guild. The wines have undergone rigorous screening by an independent laboratory before being tasted blind and selected by specialist panels of Guild members.

How Do You Bid?

Bidding takes place live and virtually on the Strauss & Co website once a year. Bidders will need to create a bidding account on Strauss & Co’s website.

SEE HOW IT WORKS
LEARN MORE

What You Can Expect

Bidders can look forward to more than 50 unique wines produced in small quantities exclusively for the Cape Winemakers Guild Auction.

Safmarine was the guild’s first sponsor. Their company, Southern Hemisphere Wines, helped get wines to the London Wine Trade Fair as South Africa was not allowed to export due to sanctions.

The Michael James Organisation took charge of the auction which it ran for the next five years.

There were only 16 guild members. Sanctions had just become a thing of the past and there was buoyancy in the market.

Hofmeyr Mills were appointed as auctioneers with Henré Hablutzel wielding the gavel.

The Nedbank Cape Winemakers Guild Development Trust was founded by the CIWG, with the assistance of Nedbank, to further the education of those living and working within the South African wine industry. Kate Jonker was appointed to the CIWG office. The appointment of Johan Krige as business advisor helped create a solid business platform for the guild.

The word ‘Independent’ began to lose its value as trading allowed for international sales. A strategic meeting was held at which the constitution was amended and the CIWG changed its name to the Cape Winemakers Guild (CWG).

Auction packaging was given a makeover with the new logo, the iconic key, giving the guild wines a unique brand identity. A constitution and a code of conduct were formulated and put into use by the CWG.

Kate Jonker was appointed as general manager of the CWG, a position she still serves in with distinction to the present date. Her appointment provided structure, organisation and a professional ethos to the CWG.

The first CWG Auction Showcase was held in Johannesburg.

At a strategic planning session the vision of the guild was formulated as ‘Leaders in the art of winemaking’. The core ethos of the CWG wines was cemented and described in two words, viz ‘Excellence’ and ‘Credibility’. The large CWG Seminar was also replaced with smaller, exclusive master class events instead.

Wine of Origin was added to the CWG auction labels.

An emeritus membership category, ‘Keeper of the Key’, was implemented for members who have made a great contribution to the CWG as a form of recognition. François Naudé and Norma Ratcliffe were the first emeritus members.

The CWG Protégé Programme was founded by Philip Costandius.

Philip Costandius, who was chairman at the time, implemented a drive to improve
the marketing and brand building of the CWG.

Bernhard Veller, as treasurer, implemented a 25% sales levy to cover all costs of the auction. This meant that members would no longer be required to pay an entry fee and a sales levy.

New member nominations started earlier in the year, giving members more opportunity to get to know the nominees at technical tastings.

The auction selection process was refined and an even higher quality of auction wines was offered.

A CWG Protégé Programme curriculum was drawn up to give more focus and structure to the programme.

Lynne Sherriff (MW) was made an honorary member of the CWG.

The selection criteria of wines for the annual auction were revised to boost creativity and achieve greater diversity of wines crafted exclusively for it.

The title of 2018 Diner’s Club Young Winemaker of the Year was awarded to a former protégé of the CWG, Rudger van Wyk, assistant winemaker at StarkCondé, for his Stark-Condé 2016 Stellenbosch Syrah.

This year marked the 25th year of sponsorship by Nedbank.

In a world first, five Nedbank Cape Winemakers Guild (CWG) protégés, composers, and neuroscientists have collaborated to create a piece of music that pairs with any glass of Cabernet Sauvignon – scientifically and creatively using music notes to interact with your brain to enhance the tasting notes of the wine.

As of April, the CWG had 42 winemakers as members and 38 protégés on the CWG Protégé Programme to date, of whom 18 currently hold leadership roles in the South African wine industry and seven are still on the programme.

When does the 2022 Nedbank CWG Auction take place?

This is a virtual live auction, with two sessions spread over two days:

Which wines will be auctioned on which days?

Do I have to register separately for the Nedbank CWG virtual live auction and the Protégé Programme online-only auction to bid on both?

How do I register to bid on the Auction?

You first need to sign up for a Bidder’s Account at www.straussart.co.za. Once you have created a Bidder’s Account, you can register to bid on all the Auctions by following the quick and easy registration process.

When can I register?

Once you have registered, you can use your email address and password to sign in by simply clicking ‘Sign In’ in the top right-hand corner of the homepage.

What bidding options do I have?

Telephone bidding is only available for our virtual live auctions. Some clients prefer to have a Strauss & Co staff member call and represent them when their lot comes up during an auction. To receive a telephone bidding form, please email bids@straussart.co.za and request a form. This needs to be completed and returned before Friday, 30 September.

Absentee bids are only available for our virtual live auctions. They are also called commission bids and may be placed by filling out and submitting an absentee bidding form. To receive an absentee bidding form, please email bids@straussart.co.za and request a form. This needs to be completed and returned before Friday, 30 September. You will not be notified that you have been outbid until after the auction.

How will I know if I was successful?

Once the virtual live auction has closed on Saturday, 1 October, Strauss & Co will send you an email confirming which lots you have purchased on both the Friday and Saturday sessions, and how to check out. Strauss & Co will invoice you for your purchases and you will pay them directly.

When you check out, you will be asked how you would like to get your wines. The options are:

* Exports will still be handled by the CWG as in the past. Strauss & Co can only issue you a VAT exempt invoice on proof of export (relevant export documentation from a shipping agent).

Successful bidders are required to make payment for their purchases to Strauss & Co by no later than two days after the date of sale (being from the fall of the auctioneer’s gavel), or on such other date as Strauss & Co and the buyer may agree upon in writing.

Payment can be made by:

When will I receive my wine?

When does the CWG Protégé Programme Auction take place?

Do I have to register for the Protégé Programme Auction?

When can I register?

You may bid on all items during this period with the winning bid being the highest bid at the close of the auction at 19:00. (NB: Please see ‘Lot bidding extensions’ below.)

How do I submit a commission bid for an online auction?

When placing a bid, you have the option of submitting a commission bid. This will allow you to set a maximum amount on a lot which the system will bid on your behalf until your maximum bid has been reached. You will then be notified once you have been outbid. To increase your bid again, simply sign in and place a higher bid on the lot.

Why does it look like I am bidding against myself?

This happens when multiple commission bids are received on the same lot. The bid that was received first will be the bid that is accepted. All the other bids of the same value are ‘pushed’ into the bidding history so that they are acknowledged even though they have not been accepted. These are also known as ‘Push Bids’. This is the reason why it sometimes appears that a bidder is bidding against themselves.

To achieve the best possible results on our online-only auction platform, and to make the bidding process as fair and manageable as possible for sellers and all prospective bidders, Strauss & Co have implemented commission bids and lot bidding extensions (see below).

What happens when I am still bidding against someone at the close time of the Auction?

Where there is bidding activity on a particular lot within five minutes prior to the lot’s allocated closing time, there will be a five-minute bidding extension on that lot until only one bidder remains. These extensions will continue indefinitely until there is no more bidding activity on the lot for a period of five minutes, implying that there is no further interest. This extra time is designed to accommodate interested bidders and allow them to compete for a lot until their ceiling has been reached. This is also designed to avoid the last-minute rush when bidders log onto Strauss Online at the end of the auction to leave a single winning bid seconds before the sale’s closing time. This is called sniping and is considered unfair practice to both buyers and sellers. The lot bidding extension has been designed to avoid this.

What are the bidding increments for this online-only auction?

How will I know if I have been outbid on this online-only auction?

Notifications are only sent out during an online-only auction. The system will send you an email and an SMS every time you are outbid on a lot. During the last hour of the online-only auction, we suggest that you sign in and keep an eye out on your lot so as to not lose out on last-minute bidding.

If you are bidding on multiple lots and want to keep an eye on all your bids, please locate the ‘Current Bids’ tab under your account. You will be able to view all your current bids and bid directly from that page should you be outbid.

How will I know if I was successful?

Once the online auction has closed, we will send you an email confirming which lots you have purchased and how to check out.

In order to take part in these Auctions, you will need to follow three simple steps before bidding.